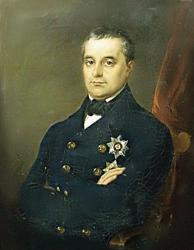 Dmitry Buturlin (1790-1849)
After Olenin's death in 1843, Nicholas I chose as his successor Dmitry Buturlin (1790-1849), a senator, privy councillor and member of the State Council. A former field officer with the Russian army who had participated in many campaigns and battles, Buturlin was also a student of military history. But he is remembered not so much for his works on history or the feats of arms which brought him medals and awards as with sorrow as Russia's supreme censor and a symbol of the censorial terror which afflicted the country in the 1840s. "Buturlin takes the stage with hatred for word, thought and freedom, preaching boundless obedience, silence and discipline," is how the noted literary critic Pavel Annenkov recollected that time. Buturlin was a member, and later chairman of the secret committee which Nicholas I founded in 1848 "for the ultimate surveillance of the spirit and direction of works printed in Russia". (This body came to be known as "the Committee of 2 April" or the Buturlin Committee.) In his biased scrutiny of matter that had already passed through the ordinary sieve of censorship, Buturlin displayed such energy and zeal in discovering pretexts for taking exception to works that, in the words of the censor Alexander Nikitenko, it was becoming "impossible to write and print anything whatsoever." Buturlin would, it seems, even have censored the text of the Gospels, and only the great familiarity of those particular works hindered him from doing so. 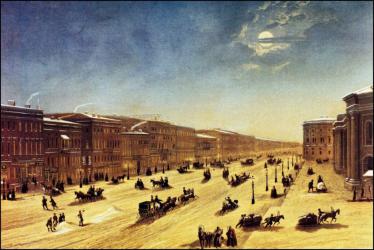 Nevsky Prospect at the Gostiny Dvor

Litography by Louis Julienn Jacottet  after a drawing by Adolf Charlemagne. 1840s

Buturlin's activities as director of the Public Library (1843-49) have not received such unmitigated condemnation, although, here too, negative opinions prevail. The librarians and public were put off above all by the innate "dry self-importance of his manner", his strict habitual expectation of absolute obedience and his tendency to issue orders and reprimands. According to Vladimir Stasov, son of the architect and one of the staff, under Buturlin the library "turned into something like the arsenal where every uniform was supposed to be under its proper number." Stasov's view was shared wholeheartedly by Ivan Bystrov, who had been taken on to assist Krylov and received his first lessons in bibliography from the fabulist. Not wishing, as he put it, to play the role of Molchalin (a character in Griboedov's Woe from Wit who constantly humbles himself), Bystrov resigned from the library. Vostokov was unable to bear the director's abrupt manner and without protesting against his blatantly unfair dismissal he also left. The "rough despot", as Stasov called Buturlin, acted in such a way that not a trace remained of the friendly atmosphere of Olenin's time. 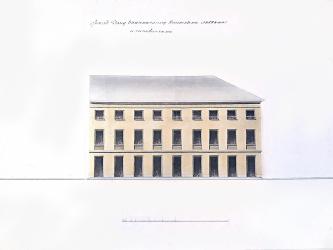 A stone annex for library staff, booksellers, and bookstores

Yet, for all the extremity and harshness of the measures which Buturlin introduced, it must be admitted that some of them were dictated by the state of the library (immense stocks of unsorted books and manuscripts, the lack of inventories or catalogues of these works, confusion about duties and responsibilities, failure to observe service regulations and hours of attendance in the library). It was under Buturlin that the first catalogue of the Manuscript Department appeared. Afanasy Bychkov, who worked in the library from 1844, produced an inventory of the Church Slavonic and Russian manuscripts which scholars acknowledged to be exemplary. The work of cataloguing books in the Russian and History Departments was continued. Notable advances were made in describing and organizing the collection of prints. "Responsible curator" appeared in the halls where the stocks were kept and relative order was established with regard to the location of the books. Buturlin introduced the first experimental quotas for inventorizing publications, taking as a basis the amount of work he himself could perform in a day. Yet the fact that he turned all the librarians into "pen-pushers", as Vastly Sobolshchikov put it, did not mean an end to blunders and curious incidents. The ways of Nicholas I's chancery met with a fair degree of passive resistance when applied in the library.

The users of the Public Library were especially inconvenienced in Buturlin's time: the working hours of the reading room were reduced and subscriptions to new foreign newspapers and periodicals were at first limited and then cancelled altogether (after the events of the revolutionary year 1848, Buturlin preferred to "put up the shutters" on this "little window on Europe"). The noted economist and public figure Vastly Bervi-Flerovsky accused Buturlin of deliberately neglecting the Social Sciences and Law Department and of creating uncomfortable conditions for those wishing to work in the library. Its reputation was not enhanced either by the fact that Buturlin combined the functions of scourge of the press and head of an establishment intended for public enlightenment.