Book of the Dead

At the moment the National Library of Russia preserves some 28 000 Oriental manuscripts: codices, fragments, scrolls, documents (charters, letters, etc.), xylographs, and drawings fully illustrating the history of the evolution of writing and of the art of making books in the East.

The chronological span of the collections is from the 10th century before Christ (papyri from Ancient Egypt) to the present day: its geographic span is from Japan and Indonesia to Spain, from St. Petersburg to Ethiopia.

The four Egyptian papyrus from the Theban necropolis - fragments of the Book of the Dead, dated back to the 10th century BC, are the most ancient monuments of writing. The Oriental holdings include books on palm leaves, birch and palm bark, leather, parchment and paper, texts carved on stones and wooden boards, embroidered on silk and painted on canvas, Chinese and Japanese woodblock prints and drawings. With all the variety of forms, the basic is the book-codex, which appeared at the beginning of the new era and became widespread first in the Christian environment, and then adopted by people of the two other monotheistic faiths - Jews and Muslims.

Many codices, both parchment and paper, demonstrate the highest artistic level; they strike with calligraphic handwritings and exquisite miniatures, ornamental decoration and fine bindings.

A large number of manuscripts are rare in content and unique, previously unknown works. The thematic range is extremely wide: among them are not only religious and philosophical writings, but also books of fiction, historical works, dictionaries, treatises on linguistics, exact and natural sciences - mathematics, geography, astronomy, medicine.

Then the Imperial Public Library was officially inaugurated in 1812, its Oriental manuscript holdings consisted of 183 items, 103 of them being from P.P. Dubrovsky's collection.

It would not be an exaggeration to say that the Orientalia of Dubrovsky aroused an interest in collecting Eastern manuscripts among Russian society and, most importantly, from Russian emperors. Thanks to Alexander I, Nicholas I and especially Alexander II, the Library received more than 20 thousand eastern manuscripts — war trophies and diplomatic gifts, collections whose costs exceeded the Library’s budget. 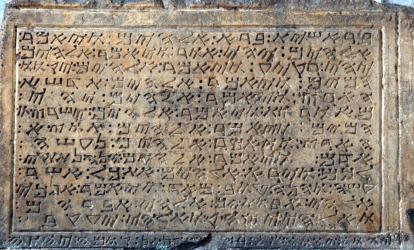 
Written in the Hebrew language, in the Samaritan alphabet. The inscription on the stone. 4 cent.
F.1299 (Literary Landmarks on Stones), no.  21.

The largest acquisition made during the history of the Library is the collection of the Karaim traveler, merchant and archeologist Avraam Firkovich which numbers some 19 000 items. It is one of the word's largest and most precious private collections. The Firkovich collection includes 12 out of the 18 now known oldest manuscripts. Among them are biblical books of particular artistic, historical and cultural value. The most celebrated Hebrew manuscripts from the National Library of Russia are: the Leningrad Codex, of the year 1010 - the oldest complete manuscript of the Hebrew Bible with its 16 decorative illuminated sheets; the Last Prophets of 916 (Codex Babilonicus Petropolitanus) - the first among the known manuscripts with the Babylonian system of vowels in different syllables; the incomplete Bible of 929 decorated with the pictures of five menorah (a candelabrum with seven branches).

The manuscripts were gathered both in the Russian Empire and in the Middle East. Then Firkovich visited Cairo, where he bought from the Karaite community manuscript fragments of the 10th – 15th centuries in Hebrew and Arabic. These manuscripts were found in genisah, a repository of worn-out books. Among them are many works in terrible physical condition, but extremely valuable in terms of their contexts.

Hand-written Islamic books are also well represented. Over 2000 Arabian codices and fragments include a whole collection of the 8th - 11th century Qurans in Kufic alphabet, the 9th century fragment of the unique genealogy of the Arab tribes. Among the Arabian books, there are many different scientific works, such as the Geography by Muhammed al-Idrisi with 37 map and the Depiction of Celestial Constellations of Al-Sufi. The latter proves that books in Arabic were written and copied not only in Arabic countries but also in Iran, Central Asia, Turkey, Dagestan and other Islamic areas and decorated in their traditions. It is necessary to mention Arab-Christian manuscripts of the 9th – 16th centuries, that number over one hundred. 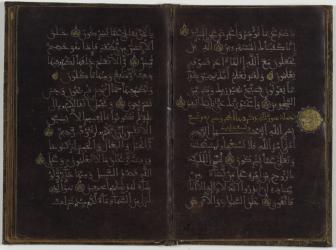 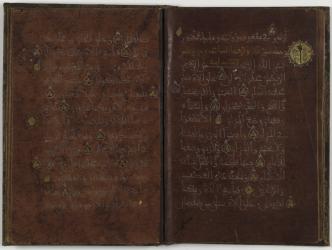 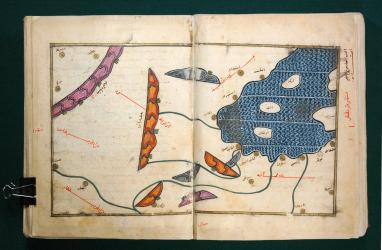 The Don River and the Volga River; Volga Bulgars, Burtases and Khazars


In the map, South is oriented the top of the map, East is towards the left of the map and West towards the right. From the Geography by Muhammed al-Idrisi. Fol. 1300.
F. 907 (Arabic Manuscripts. New series), No. 176

Among more than 1000 Persian manuscripts, 140 are decorated with miniatures starting with "Shah-Name" of 1333, produced in Shiraz. The Oriental stocks also include In addition to the Shiraz, the Herat, Kazvin, Mashkhad, Esfahan and Qajar schools of Persian miniature painting are represented in the fund, but the most complete is the Tebriz school of the 2nd quarter of the 16th century. Works of famous Persian speaking poets — Firdausi, Nizami, Saadi, Jami, Dikhlavi and others — as well as Kazvini's Cosmography lists were more often decorated with miniatures.

Many manuscripts were created by outstanding masters of calligraphy of the 15th - 17th centuries, such as Sultan-Ali Makhshadi, Shah Makhmud Nishapuri, Mir Emad. The Persian manuscripts produce great impression not only by their miniatures and calligraphy but also by their overall design: by their ornamental illuminations and margins as well as by their stamped and patent leather bindings. Since the 16th century, individual miniatures and specimens of calligraphy samples were compiled in murakka - albums.

Some of the Turkic manuscripts were also designed in Persian tradition. First of all this applies to the works of the Uzbek poet Alisher Nava'i. The library has three lifetime copies of his works, starting with the so-called Early Diwan - a collection of poems produced in his first creative period. This collection was rewritten in 1465 when the author was 25 years of age.

The Oriental collections include archives containing documents and translations into Oriental languages made in the 20th century.

Thanks to Orientalists, who at various times served in the Library (among them Academician B. Dorn, Prof. V. Smirnov, A. Garkavi, N. Pigulevskaya, G. Kostygova), the richest Oriental manuscripts holdings were put into scientific circulation. They attract the attention of researchers from around the world; masterpieces of book arts of the East are actively exhibited in Russia and abroad. In recent years, eight albums have been published by employees of the Library, dedicated to the most significant landmarks of the Eastern literature.