Highlights from the Manuscript Collections

Here you will find selected highlights from our manuscript collections. You can view digitised copies of some important manuscripts on our website. The full-text electronic versions of the manuscripts, with descriptions of the books, are readily accessible to the general public. 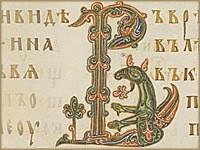 Ostromir Gospel
The Ostromir Gospel is the earliest surviving East Slavic precisely dated manuscript book. It was commissioned by Ostromir, the governor of Novgorod, the most important city of North West Russia. The manuscript was made with great art and skill in the mid-11th century as a gift for St. Sophia's Cathedral in Novgorod. The Ostromir Gospel is written on good quality parchment in exquisite uncial letters, a kind of round hand. The book is notable for its luxurious decoration: it is embellished with bright paints and gold in the Old Byzantine style. Since 1806, the Ostromir Gospel has been housed in the Manuscripts Department of the first public library in Russia. 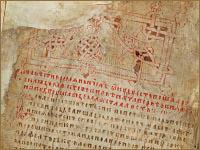 Laurentian Chronicle
The Laurentian Codex is one of the world's most important landmarks in the history of the handwritten book. It is the earliest surviving dated Russian chronicle. The unique manuscript was written on parchment in 1377. Since 1811, the book has been held in the National Library of Russia (formerly the Imperial Public Library) in Saint Petersburg. In 2013, the Laurentian Chronicle was inscribed on Unesco's Memory of the World Register. 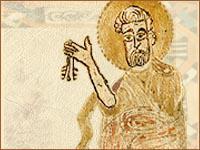 Codex Zographensis
The Manuscripts Department of the National Library of Russia can boast the world's richest collection of Glagolitic literary landmarks. Among the earliest Glagolitic manuscripts dating the 11th century is the celebrated Zograph Gospel. It is one of the most interesting and informative Old Russian historical books. The  online version of the Gospel opens up universal access to the most famous manuscript written in the most ancient Slavic alphabet. To facilitate understanding of the text, it is paralleled by modern Cyrillic transliteration. 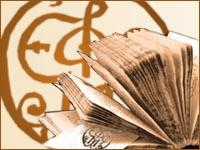 Euphrosynus Manuscripts - Fifteenth-century Miscellanies of the "Leonardo da Vinci of Ancient Russia"
The Euphrosynus Readings is a distinctive and in many respects mysterious phenomenon of Russian culture. The miscellanies were written by the monk Euphrosynus of the Kirillo-Belozersky Monastery (St. Cyril of Beloozero's Monastery) in the late fifteenth century. Even today the readings overwhelm imagination by a wide range of works contained in them. The compiler's editing methods and the contents of the manuscripts are also quite startling. Many of works are unique and have come to us only thanks to Euphrosynus. 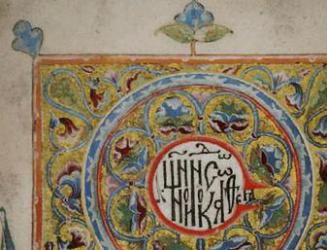 Solovetsky Monastery Collection
The Solovetsky Monastery Library is one of few book collections of Russian monasteries that have survived intact. The library dates back to the late 15th century and is associated with the educational activities of Hegumen Dositheos. The online resource features the most remarkable landmarks of history, literature and art, that once belonged to Dositheos and, from 1928, became part of the Solovetsky collection of the National Library of Russia. 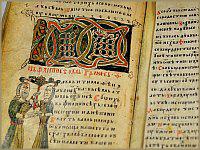 Serbian Manuscripts in the collections of the National Library of Russia
The web resource presents a full body of Serbian handwritten books held within various collections of the Manuscripts Department. You can see about 370 Serbian manuscripts ranging from the 12th to 19th centuries. The project commemorates the curator and researcher of the Slavic stocks Vyacheslav Zagrebin (1942-2004). 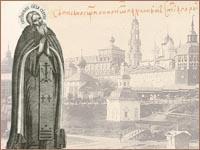 "The Life of St. Sergius of Radonez" – Pachomius the Serb's autograph.
Sergius of Radonezh (1314-1392) is one of the most venerated and popular saints in Russia. The fifteen century landmark "The Life of St. Sergius of Radonez" is written by the own hand of the famous hagiographer Pachomius the Serb, also known as Pachomius Logothetes. The "Life" and records from historical chronicles and legends show Sergius of Radonezh as the most brilliant example of the Russian ideal of holiness. He practiced great austerity, but at the same time served for people. He strove for a hermit's life but founded several monastic communities. The saint surprisingly combined mysticism and politics, disdain for material possessions and caring about a monastery farmstead. 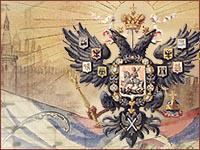 Music Gifts to the Russian Emperors
Music played an important role in the life of the Imperial family members. They were  taught music from childhood and played musical instruments, all of them were known as competent music connoisseurs. During the coronation ceremony and other occasions for public celebration such as a wedding, a birth of a heir, a name day, the Romanov family members recieved numerous gifts of various kinds. Among them were musical manuscripts. Most of them are now held in the National Library of  Russia. 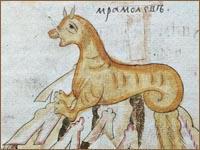 EX LIBRIS
The resource shows little-known materials from manuscripts in our libary's collections. These are striking and curious fragments of Old Russian books. They include unusual illustrations to famous stories and original interpretations of the text, colourful elements of the manuscript decoration, unique scribes' and owners' notes. Titles for illustrations are given in Russian. 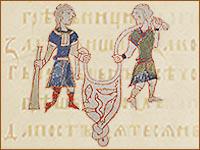 OLD RUSSIAN LITERARY MANUSCRIPTS
The comprehensive resource features Old Russian literary handwritten books created for many centuries. Each manuscript is unique. Our Manuscripts Collections comprise the most valuable landmarks of Old Russian literature: from the eariest surviving literary miscellany of 1076 to the early 18th century works from the Peter the Great's era. For fist time, the NLR provides universal access to primary sources to promote a deeper understanding of history of Old Russian literature. The resource is maintained in Russian. 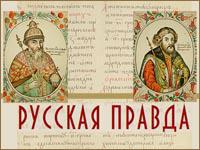 RUSSIAN JUSTICE
Here you can find a commented publication of the first Russia's  code of laws. The legal guidance was written under Yaroslav the Wise in the 11th century. The Russian Justice (Russkaya Pravda) was a main source of early Russian law. The resource was created using manuscripts preserved in our ibrary.  A 15th-century copy of the Russian Justice (Extensive edition) served as a basis for the publication. The resource is maintained in Russian. 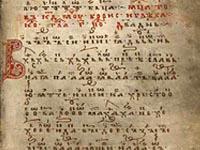 ANNUNCIATION KONTAKIA (HYMNS)
A kontakion was a liturgical poem, set to music. Originally, they were used in the Byzantine Rite. The National Library of Russia possesses the oldest singing manuscript of the ancient kontakion notation, which contains many chants not found elelsewhere. The composition and some specificities of the hymns suggest a cultural relationship between Novgorod and Byzantium. The book is decorated with cinnabar initials formed of fantastic birds and animals. One of the initial letters is composed of an image of a Byzantine singer. The digital version of the manuscript was prepared in collaboration with the St. Petersburg State Conservatory. The resource is maintained in Russian.