For the last twenty years the staff have been working to reunite collections dispersed within the general holdings of the Printed Music and Recorded Sound Department. There was created the individual catalogue of the largest of collections — the Yusupov one. Each private collection, acquired within these years, has individual shelfmarks for items in the collection, in order to preserve its integrity.

Since 1925, the National Library of Russia has received five collections of music from various cultural figures of Russia. The main part of them are now housed in the Department of Printed Music and Recorded Sound (ONIIMZ); partially are held in the Manuscripts Department of the NLR.

After 1917 individual manuscripts came in from the town palaces of Stroganov and Yusupov families at St Petersburg and the royal suburban palaces at Pavlovsk and Peterhof. This music collection was amassed by several generations of the family of the Yusupov Princes, Russian statesmen and cultural figures. It is one of the most interesting example of domestic nobleman's culture in all the variety of its moral and aesthetic values. In accordance with the historic circumstances this collection was dispersed as far back as the nineteenth century. A substantial quantity of scores was lost or simply destroyed, so the collection of the National Library of Russia, obviously, is the largest at present. Now the National Library of Russia owns the part of music collection of the family of the Yusupov Princes, which was received from the town palace of Yusupov family in Saint Petersburg in 1925. Manuscript scores were transferred to the Manuscripts Department, printed music now is housed in the Printed Music and Recorded Sound Department. On its arrival in the Library, this part of the extensive collection of scores took the name Yusupov collection.

The Printed Music Department received approximately 300 volumes of works dated variously – convolutes and about 60 separate notebooks. The collection, held in the Department, covers the sufficiently wide period from 1706 to 1895. Most items of printed music by Russian and foreign composers date from the last third of the eighteenth - early nineteenth centuries. These are the most precious part of the Yusupov collection formed by its founder — Prince Nikolai Borisovich Yusupov.

The collection consists of opera scores and claviers, sets of parts for symphonic and chamber-instrumental works, compositions for voice and solo instruments by mostly foreign authors. Many rarities carry autographs of the authors, owner inscriptions.The scores were bound together into convolutes and demanded a careful detailed description. The items were preliminary processed by Andrey Rimsky-Korsakov, a Russian musicologist and son of the Russian composers Nikolai Rimsky-Korsakov. In 1930 he compiled a card index. 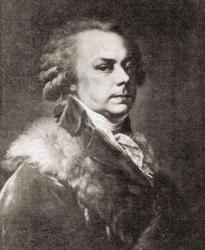 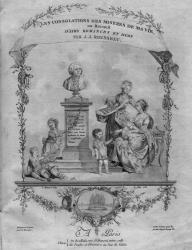 The passionate lover of music and the author of several very popular operas, Rousseau gave up composition for some time. However, during the last years of his life, he returned to it, composed many romances and songs. 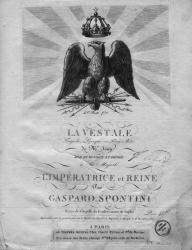 The title-page of the opera "La vestale" ("The Vestal Virgin") by Gaspare Spontini. Paris, 1807

Napoleon I of France very like this opera composed in 1807, it also was greeted by the French public. No wonder that its score was included in the Yusupov collection.

The Printed Music and Recorded Sound Department manages the Semenov Collection as a single entity. It was named after the collector who amassed it for all of his life and bequeathed the collection to the National Library of Russia.

Ivan Semenov (1903–1991) was a musician (a viola-player) of the orchestra of the Maly (Small) Opera and Ballet Theatre (today the St.Petersburg Mikhailovsky Theatre) and a noted collector and a book lover. His collection came in the National Library of Russia in 1992 and passed into holdings of the Prints Department and Printed Music and Recorded Sound one. The collection contains rare scores from the eighteenth to the twentieth centuries, books with Semenov's dedicatory inscriptions and bookplates. Among gems of the collection are portraits of great musicians painted in oil, lithographs, engravings, two sculptural portraits.

The largest collection, added to the holdings of the Printed Music and Recorded Sound department, is the collection of Nikolay Burenin. Nikolay Burenin (1874–1962) participated in the revolutionary movement in Russia, worked in the Commissariat of Theatres and Spectacles, then in the Theatrical Section of the Department of the People's Education, created literary works (was a member of the Writers' Union of the USSR), published his memoirs. He was a professional musician (at one time was the accompanist of F. Chaliapin). Burenin also was known as a collector of rare books and scores.

The Burenin music collection arrived at the National Library of Russia in 1980. It includes Russian and foreign printed music from the nineteenth to twentieth centuries.

Alexander Schtrimer (1888–1961) was a Soviet violoncellist, a Meritorious Art Worker and a Professor of the Conservatory, who created the school of Leningrad violoncellists. Among his students are Daniel Shafran, Yuri Falik and others. In his youth, he was a member of the Quartet of L. Auer. He gave a lot of concerts with his wife, pianist Anna Streemer, played with many outstanding musicians.
His collection was acquired by the National Library of Russia in 1996.

The Schtrimer collection includes printed music from the nineteenth to twentieth centuries bearing the owner's notes.

The collection contains over 390 items.

The collection of scores, books and gramophone records accumulated by the professor of the Leningrad conservatory Lev Barenboim(1906-1985), a Leningrad pianist and a musicologist, was presented to the Printed Music and Recorded Sound Department after his death by his son during the 1990s. All collection items have Barenboim’s personal stamp, among them are many autographed copies and real rarities. Due to the large size and a number of defective copies, the collection is still being processed.