Music postcards began to be published in Russia as far back as the end of the nineteenth century. Many of them were purely promotional. They usually depicted portraits of popular singers and extracts from favourite music works. There were quite a number of postcards with notes and texts of wartime songs, marches, anthems, Cossacks' songs, folk songs, new romances and even songs of State convicts. Music cards were highly coloured. Those days they were common things. Today these are rarities.

Postcards with Cossacks' songs, published by diverse Cossacks' societies in period of 1904-1915, are highly skilful and coloured examples of printing arts. 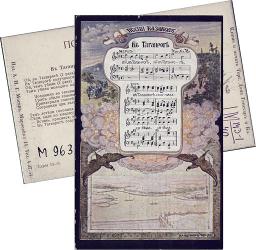 Postcards with Cossacks' songs, published by diverse Cossacks' societies in period of 1904-1915, are highly skilful and coloured examples of printing arts. 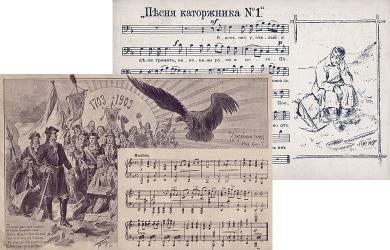 The music postcard to 200 years of St.Petersburg. An illegal postcard of 1907

Postcard depicting Peter the Great was published to commemorate 200 years of Saint Petersburg. The postcard reproduces a fragment of one of the anthems in honour of the bicentennial anniversary of the city.

Postcards with songs of State convicts are illegal publication from 1905-1907, first of all, this explains their value. They were often published by series: Songs of Convicts, Songs of Workmen etc. Only isolated copies of such editions have survived.

During the Soviet pre-war time, postcards of that kind were published seldom. More often these were propaganda cards with music and lyrics of revolutionary songs, songs for the masses. The total run of postcards was not too large.

Music postcards were suddenly made necessary in besieged Leningrad, in 1942. There were created more than 600 songs, which were included in wartime song books such as A Front-line Song Book, Songs of the Red Banner Baltic Fleet, To the Battle for Motherland. 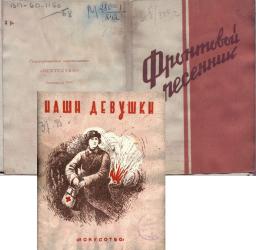 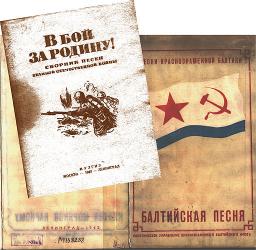 However, nothing could compare with postcards in the speed of delivery. Postcards was sent by military post and arrived at the front in some hours. Music postcards came to be in great demand. It was caused mainly by an acute need for new songs. The exhausted city lacked for paper, facilities and people, nevertheless, three printing houses operated in besieged Leningrad. A run of 10 000 to 50 000 copies of every music postcard was a quantity demanded. A number of song titles are estimated at many tens. Few publications promoted propagation of new song at the front and on the home front like music postcards. The Blue Kerchief composed by Jerzy Petersburski, Behind the Far Village Edge by Nikolai Budashkin, Evening in Port written by Vasily Solovyov-Sedoy and many other songs owed their popularity due to blockade postcards for the most part. 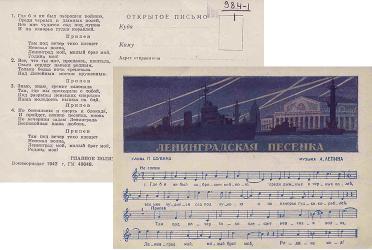 The music postcard the "Leningrad Ditty" by A. Lepin. 1942

The postcard with music and lyrics the Leningrad Ditty by A. Lepin was published in besieged Leningrad in 1942. It is notable for its peaceful theme, this is a slow waltz, reminding soldiers at the front of peaceful life and home. 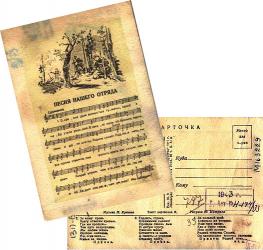 It is one of war blockade postcard. Sent out, mainly, to the fronts of the war, postcards were missing without trace. Unfortunately, only a few of the several thousand postcards published in besieged Leningrad have survived.

Under wartime conditions, it was difficult to preserve postcards. Unfortunately, only a few remains of the vast mass of these postcards have survived. Today blockade music postcards are not only rarities but something like landmarks of Russian printing arts.

After the Second World War postcards containing music and lyrics of a new song continued to be published, but there was an decrease in the number. Photographic cards with portraits great Russian singers like Ivan Kozlovsky and Sergei Lemeshev and a music line from a popular song or an aria were generally widespread. Music postcards were in a strong demand until 1948-49 when "an audio letter" appeared. 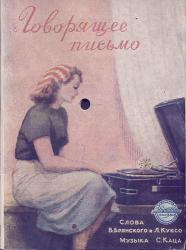 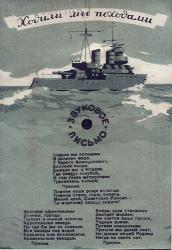 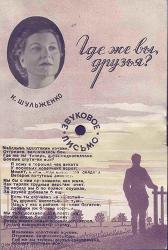 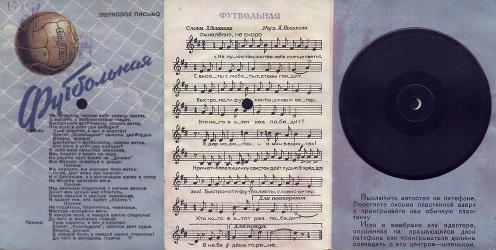 The very popular song "Football". Music: A. Novickov. Lirics: L. Oshanin. On the right is a miniature gramophone record with a fragment of the song. Such mini-records were enclosed with every sound letter

This time, a miniature gramophone record with a fragment from a popular song or an aria was attached to a postcard. The range of such sound letters was varied.

In the mid-1960s, audio letters was replaced by flexible vinyl recordings which came out with music magazines. The first audio magazine in the USSR was the monthly periodic publication Krugozor /Horizon/. Its popularity was so high, that it ran until the very late 1980s. 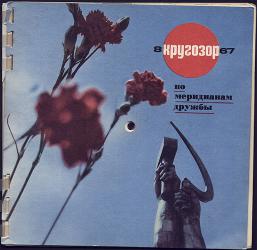 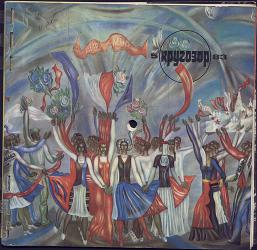 Audio magazines and books with flexible recordings survived until CDs and DVDs supplanted them. Today these discs-illustrators are often enclosed with a book instead of sound vinyl recordings.