The invention of the printing press by Johannes Gutenberg in the fifteenth century enabled books to be mass produced in Western Europe. The Gutenberg Bible (also known as the 42-line Bible), produced in the German city of Mainz in around 1450, was the very first book printed using movable type in Europe.

The National Library's collection of incunabula (books printed before 1501) is the largest in Russia. Some 7 000 volumes provide an extremely rich picture of the history of printing, culture and art in various countries of Western Europe during the fifteenth century. Individual collections of rare editions were separated off from the general stocks back in the nineteenth century. Subsequently they formed the Rare Books holdings which is on a par with the world's greatest repositories in terms of size and historico-cultural significance.

Faust's Study, the special repository of incunabula, houses many the Library's rare possessions. Among the library's examples of early printing is the page from the original Gutenberg Bible dated between 1450 and 1455. The National Library's collection of incunabula contains masterpieces by early printers of Germany, Italy, France, Sweden, Switzerland, the Netherlands, Poland, Hungary and other countries. It is particularly strong in the material of Germany, and Italy. The collection consists of a wide range of works in history and law, theology and philosophy, natural sciences and medicine, as well as belles lettres, dictionaries and encyclopaedias.

Particularly noteworthy among them are the first editions of the German mediaeval romances Titurel and Parzival issued in 1477, as well as the French mediaeval romance Lancelot du Lac dating from approximately 1500. The National Library of Russia is especially fortunate in possessing works by the greatest ancient authors like Cicero, Aristotle, Titus Livius, Terentius; history books such as the World Chronicle produced by the physicial and humanist Hartmann Schädel in Nuremberg in 1493. 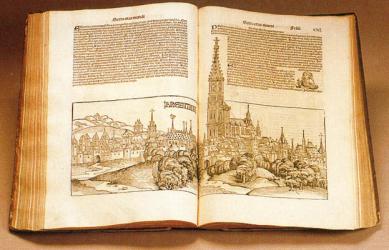 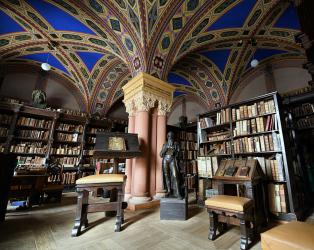 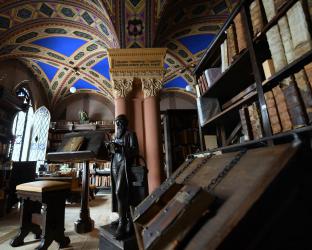