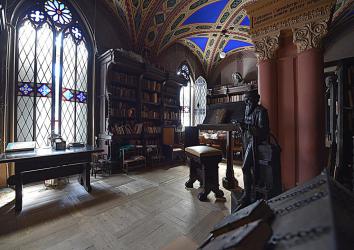 Faust's Study - the special repository of incunabula
The Gotic Hall or Faust's Study is a special repository for incunabula — books published in Europe from the invention of the printing press by Gutenburg to the end of 15th century. The Gothic Hall, built in the middle of the 19th century, was stylized to resemble a cell of a medieval scribe. It was so vividly reminiscent of the room of a scholar from the Middle Ages that soon was given the name of "Faust's Study".

The National Library's collection of incunabula is the largest in Russia. Faust's Study houses many the Library's most valuable and rarest possessions. During the tour, groups can see rare examples of book art and bookbinding, as well as books from the libraries of famous historical figures: Louis XIV, Anna of Austria, Marquise Pompadour, Cardinal Richelieu, Napoleon I and others.

Visitors will also be given an opportunity to view  European and Russian volumes of the 15th-18th centuries and West European miniature books, Bibles in different languages and liturgical books printed in ancient Slavic alphabets, french materials from the 1871 Paris Commune and erotica books, Polish publications from the Uprising of 1861–1865.

The library is truly without rivals for its stock of early Russian printed books. Here one can find Slavonic incunabula, editions issued by Slavonic printshops in the Balkans, Venice and Ugro-Wallachia, the works printed in Cyrillic in the 16th century, including all the known publications of Franzisk Skorina.

Noteworthly is the world's largest collection of books in the simplified civil orthography from the time of Peter the Great. Among the Rare Department's treasures are Burckhard von Piirkenstein's Geometry (1708), the 1708 book of rules for ladies on how to start writing and express your feelings, the General Geography by the Dutch cartographer Bernhard Varenius (1718), as well as the first Russian newspaper Vedomosti (1703) and other rarities.

Visitors will learn about the Library of the 1st Cadet Corps (the former Land Knight Academy) in Saint Petersburg. The library of the military school for noblemen was called one of the main city's attractions already at the late 18th century. This is one of the few educational universal libraries that has survived from the 18th and 19th centuries to this day.

The tours are available for groups of up to 15 people per guide.

The tours will take about an hour and start from the Entrance for Groups under the sign «DIRECTORIAL BOARD» - «ДИРЕКЦИЯ» from Sadovaya Street.

Please note! Admission to Faust's Study is only by a library card. If you are not our reader, you can join the Library. To get a library card, you will need to visit the Main Building from the Reader Entrance from Ostrovsky Square.
Coats and bags (including backpacks) should be left in the cloakroom.

Advance booking is recommended. To book a tour you should write us date, time and number of people. You can order the guided tour of the Faust's Study by e-mail - rarebook@nlr.ru: 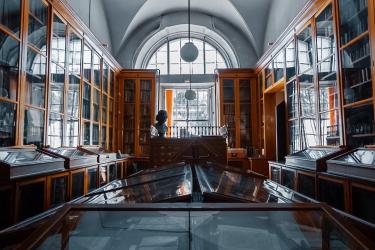 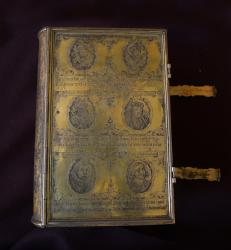 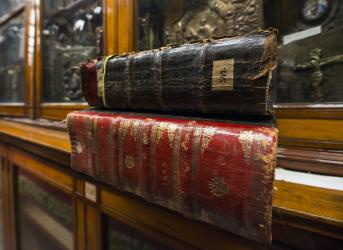 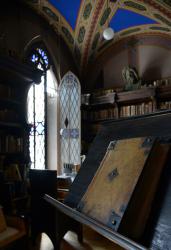 The Library is closed on public holidays and last Tuesday of each month.
On pre-holidays, the Library is open from 9:00 to 16:00.