Broadsides from the Early Period of the Soviet State

The National Library holds the world's most comprehensive collection of 9,000 single-sheet broadsides and proclamations from all parts of the Soviet State which were published during the years following the October Revolution of 1917. This collection comprises decrees, acts, orders, and other official statements issued by the Soviet official bodies, including the national government, institutions of local governing, the Central and regional committees of the Communist Party, trade union organizations, military departments etc. The broadsheet publications were produced between 1917 and 1925 and cover about 70 regions of the Soviet Republics. The greater part of single-sheet material is printed in Russian, but there are some items in Estonian, Ukrainian, Tatar, English, German, French, Polish and other languages. Since 1957, all such material was kept together in the broadside collection as a whole. 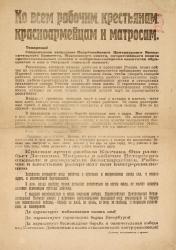 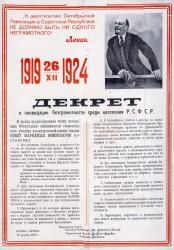 Broadsheet publications are listed in a separate printed catalogues of the collection:

Part of the broadsides have been scanned to create digital images of the documents. We continue to digitize historic broadseets and make them available to the public. Now you can view two parts of documents online in the Digital Library: