Russian Books of the Eighteenth to Twentieth Centuries 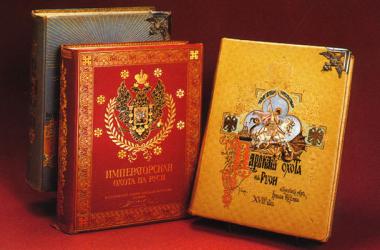 Books by Nikolai Kutepov on royal hunting in Russia

Two books by Nikolai Kutepov, published in 1898 and 1911 respectively

The Russian book stock is the largest collection in the National Library of Russia, as its name would suggest. The chronological boundary historically selected for works to be included in it was 1725 — the year of the death of Emperor Peter the Great, whose reign was truly epoch-making for the country as a whole and for Russian book-printing in particular.

A special place among these treasures is taken by publications of the eighteenth century, which include imperial decrees, homilies, descriptions of various kinds, ranging from events of national importance, such as the coming to power of Empress Elizabeth, to the collection of "Peter the Great's study", and of course the works of Russian writers, enlighteners, historians and philosophers. They convey the special flavour of the century which has gone down in history as the Age of Enlightenment. Often these items have survived nowhere else.

The 1910s saw the appearance of a principally new type of poetry book which with its deliberate anti-aestheticism threw down the gauntlet to existing cultural standards and traditions. The desire to shock the reader and to break the accepted rules for exquisite volumes of verse explain both the use of more convenient printing techniques (which did not, however, permit large print-runs) and the seemingly primitive nature of the illustrations, careless design and collation. But hidden behind the obvious wish to shock lay something deeper: a criticism of literary and artistic norms that had outlived their day, and a radical, at times unceremonious reassessment of values, a seeking after purity in an image and new possibilities for synthesis. 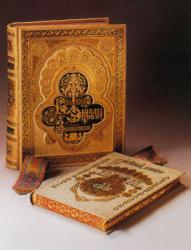 One of the first such books, the Futurist anthology Sadok Sudei (St Petersburg, 1910), was printed lithographically on the reverse side of wallpaper. It included works by Elena Guro, Velimir Khlebnikov and David Burliuk, and was designed by Vladimir Burliuk. Late in 1912 the same group published in Moscow a collection with the impudent title A Slap at Public Taste. With its cheap paper, hessian binding, austere typeface and complete lack of illustrations it was intended to create an impression of abject poverty in deliberate opposition to the opulence of the aesthetic World of Art and Apollon publications. The exceptional talent of the creators, who included Vladimir Mayakovsky, Vasily Kandinsky and Benedict Livshits, made the book more than just the latest in a series of scandalous youthful revolts: it became a manifesto of Russian Futurism.

The creative ideas and formal experiments contained in these miscellanies from the 1910s opened up new possibilities for artists working on books. They undoubtedly influenced the design of the children's books which the Leningrad publishing house Detgiz produced in the 1920s. Today again the immense interest in the Russian avant-garde has given rise to a many new experiments with "hand-made" books around the world. The publications of contemporary artists often display the same sort of playful approach seen in the Futurists' works: changing the traditional form of the book, placing the text and illustrations in unusual ways and deliberately disrupting our accustomed perceptions.

There are the most noteble collections held within the Russian holdings:

More than 15 000 books in the Russian stock bear autograph inscriptions by major writers and cultural figures, prominent state figures and scholars. Since the 1950s, our research staff have been working to seek out such books from among the Library's holdings.

Books with autograph inscriptions is not kept together and there is no yet separate catalogue of the collection as a whole.

Rare and Valuable Publications Not Included in Collections