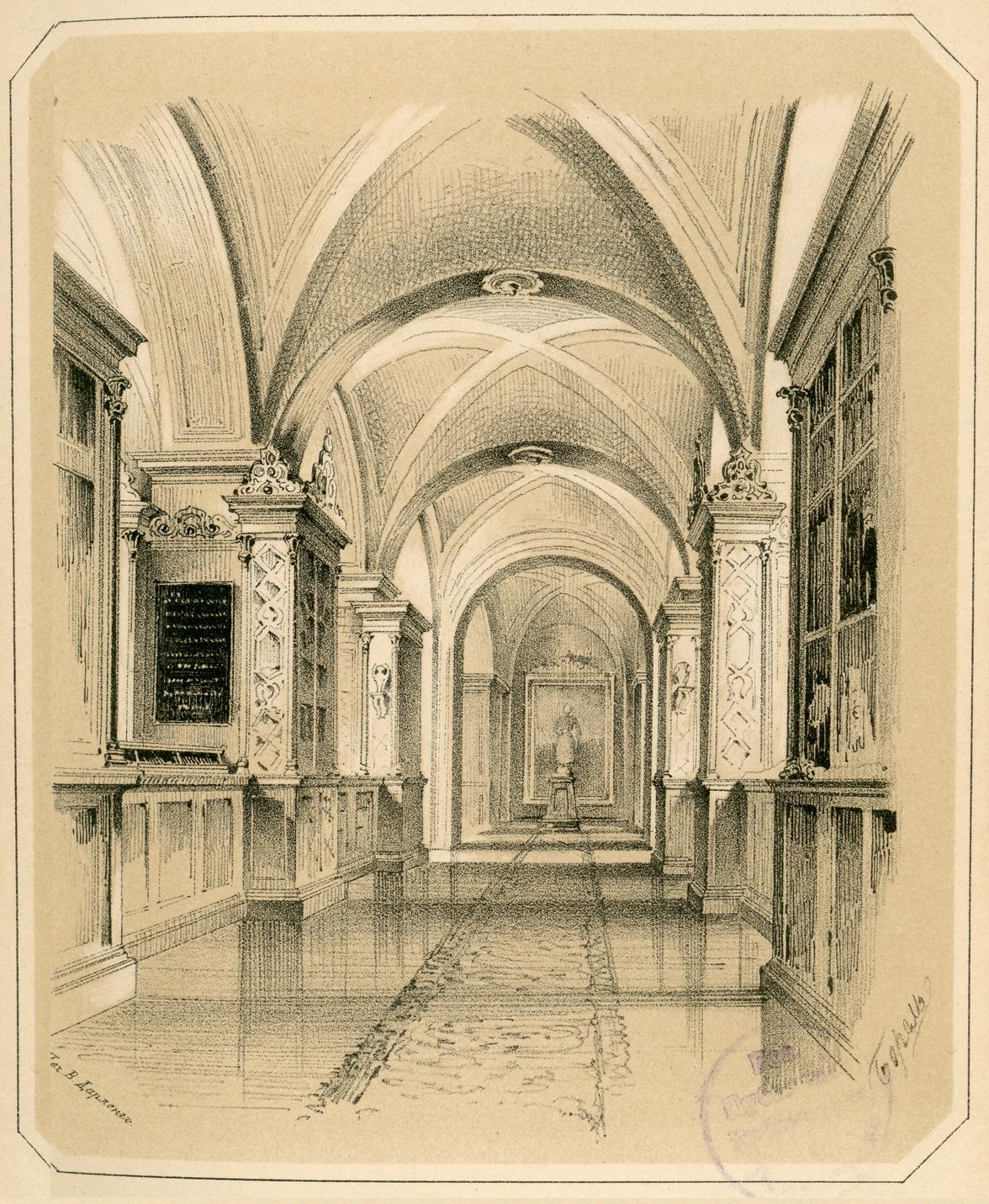 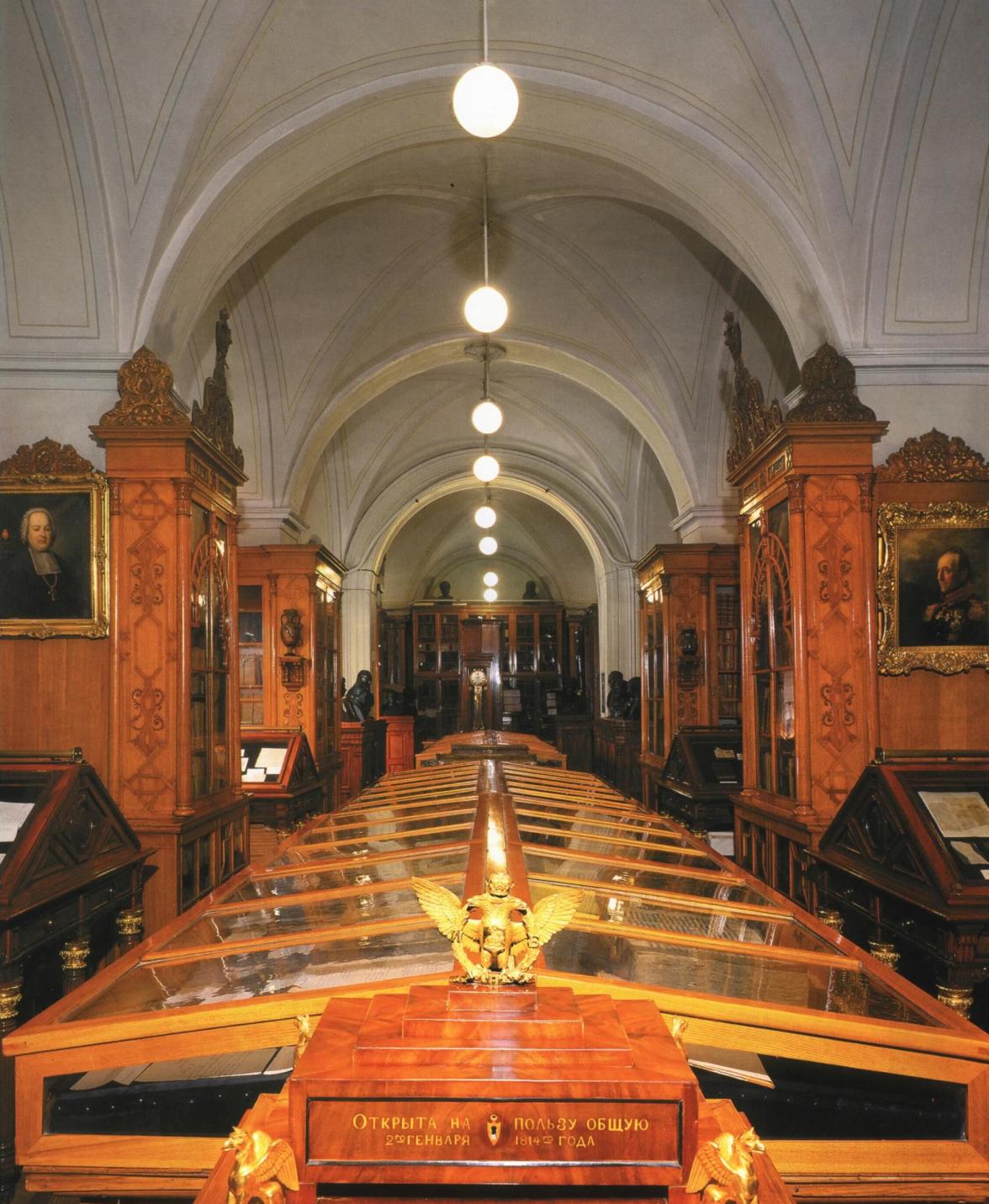 "... The front half of the room is divided lengthwise into three areas by six massive columns, three on each side. The columns are almost hidden from view. Visitors can only see low, interconnected cabinets at the columns' bases. Above are seen tall bookcases of a Moorish style, that run to the ceiling. Last four of them are decorated with Etruscan vases ..»

«The back half is a wide open space. It is decorated with a portrait of His Majesty Emperor: thanks to his largesse, the Library has received the most important treasures collected here.

Near the bottom of the portrait are a pedestal with a casket containing the library's establishment documents. On the sides of the casket there are four inscriptions. The inscription on the front side reads: "Opened for general use on 2 January 1814"; on the back: "Honoured with the Imperial visit on 2 January 1812". The left side has the words: "Approved on 14 October 1810"; the right: "Established on 23 February 1812."

On both sides of this pedestal, two showcases will be placed in a short time, for displaying the Ostromir Gospel of 1057, as the first Russian written book, and the Moscow Apostle of 1564, as the first example of Russian printing...»

Strolling through the Imperial Public Library. 1852

In 1805, the Library acquired a very valuable collection of manuscripts, assembled by the Russian diplomat Pyotr Dubrovsky while serving as the secretary with the Russian Embassy at Paris.
During the French Revolution of 1789, Dubrovsky managed to save some of papers from the archives of the Bastille. Manuscripts from the libraries of the ancient monasteries of Saint Germain and Corbie (5th-13th centuries) also came into his hands. He amassed about 8,000 autographs by famous French persons, including letters and papers by almost all French kings, starting with Louis XI. In various European cities, Dubrovsky also acquired letters and authors' manuscripts by Erasmus of Rotterdam, Leibniz, Didro, Rousseau, Voltaire and other great scientists and writers of the 16th-18th centuries. In addition, his collection included Old Slavic and Eastern writings.

Many Russian writers and scholars gave their authors' manuscripts as a gift to  Dubrovsky, commonly known as a passionate collector of such rarities.

The outstanding collection, presented by Dubrovsky to the Government, prompted the creation of a special Manuscripts Depository at the Library in 1805.

Pyotr Dubrovsky was the first appointed Keeper of Manuscripts from 1805 to 1812. Until 1812, this corner room was an apartment where Dubrovsky lived. Its interiors were designed by the academician of architecture A. N. Voronikhin. In 1851 the doorway between the apartment's premises was widened and converted into an arch. Today it is one elongated room that houses the manuscripts holdings of the National Library of Russia.

Architects of the NLR.
Manuscripts Storage Room and a casket containing the Library's establishment documents 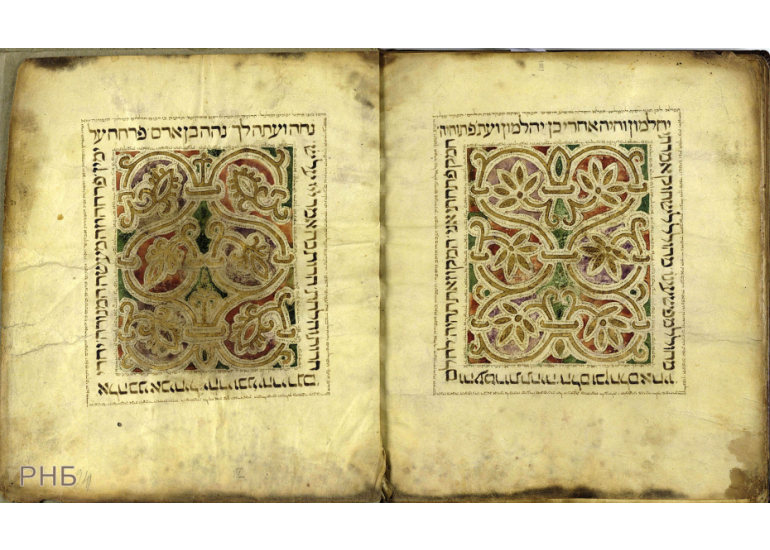 Hebrew Manuscripts
NLR #LENINBURG. Fragment with views of the Manuscripts Storage Room (The film is in Russian) 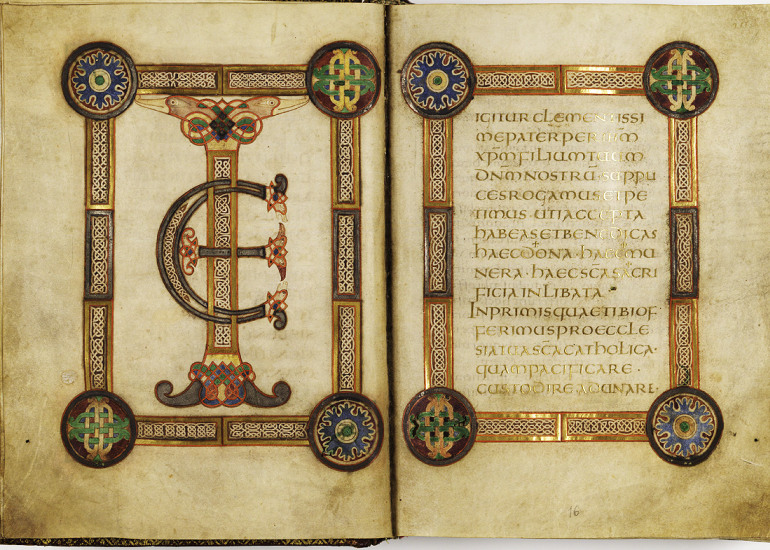