In post-reform Russia, a country moving towards a new level of civilization, the existence of the Public Library ceased, as one of the Russian periodicals stated, to be necessary only to a small group of specialists and became so "for the immense majority of ordinary mortals". Trends which were in essence only taking shape in the 1850s — the appearance of readers from the "unmonied strata of St Petersburg's population", changes in patterns of demand for books, the accelerated growth of stocks, and that increased interest shown in the most varied circles in the activities of the national library, something which Afanasy Bychkov described as "the vigilant monitoring of society" — all became pronounced phenomena towards the turn of the century. By the late 1890s the number of library users had increased almost sevenfold over the 1850s figures, the number of visits ninefold. In 1860, three thousand cards entitling the holder to use the library were issued, in 1899 the number was 16,500, in 1913 —27,500. In 1860 readers made 18,500 separate visits to the library, in 1899 — 137,000, in 1913 — 194,000.

The principle of unrestricted access repeatedly proclaimed in the documents of the Public Library had in practice been interpreted in different ways depending on the current historical circumstances. But in the Russia of Alexander II's reforms the last barriers between the classes which still existed in Korff's time were eliminated.

"The class of visitors to the reading room," Sobolshchikov wrote, "forms, as if by magic, a reflection of the transformations taking place in the population of St Petersburg. At present one finds there many persons from those classes of society which ten years ago seemed not to know of the existence of the Public Library."

In the social composition of the library's readership people of merchant, petty bourgeois or peasant origin were becoming an increasingly prominent element. The number of female library users grew noticeably: 18% by the late 1890s, 28-30% in the 1900s. The largest group of users were students: at the beginning of the twentieth century they made up 33%. By 1910 three-quarters of those receiving secondary or higher education in St Petersburg visited the library. While for them it acted as a second university, for Russian scholars it was a real research centre.

As in the first decades of the library's existence, in the late nineteenth and early twentieth centuries the majority of scholars made use of its stocks. There was now an especially large number of specialist readers (engineers, technicians, doctors, topographers, agronomists and teachers), while the uniform of the civil service became a less common sight.

The formal, museum-like festiveness of auctions, exhibitions and guided tours gave way to a practical workaday system. The library was returned to the Ministry of Public Education. One new feature which appeared in the 1880s was the recruitment of women as "non-staff workers"; the first to join the library were Josephine Stark and Lydia Zakorina. (By late 1917 more than twenty women were working in the Public Library, some of them — Yekaterina Lappa-Starzhenetskaya, Vera Struleva, Lydia Olavskaya — graduates of the pioneering Bestuzhev higher educational courses.)

In the changed conditions of Russian life, the user now became the most important figure in the library. It was therefore expected, as the memorandum "on the meaning of the title Librarian" prepared by Bychkov explained, that the librarian would serve the reader with "useful advice and instructions" and not be a passive curator and registrar of the stocks. He was supposed to be up to date on current scholarship, competent in bibliography and aware of the state of the book market. 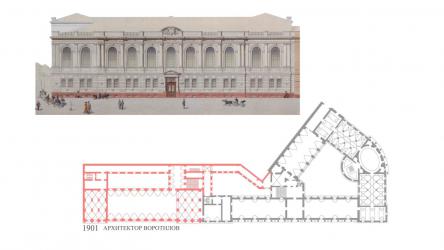 A Drawing of the Extension of Rossi's Building by Vorotilov's Design 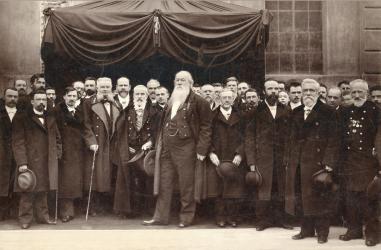 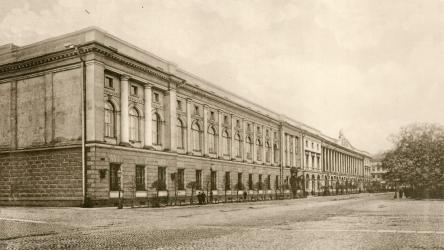 The Extension of Rossi's Building by Vorotilov's Design

Afanasy Bychkov, who became director in 1882, following Korff's immediate successor Ivan Delianov, invested much energy in solving the most urgent problems — increasing the funding and the staff, and also the construction of a new extension. His policies were continued by Nikolai Schilder (director, 1899-1902) and Dmitry Kobeko (1902-18). 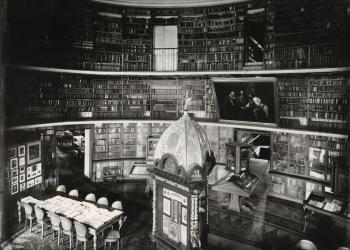 The Public Library drew readers with the completeness of its stocks and the regular and efficient way in which they were kept up to date. In the first half of the nineteenth century no more than 5,000 volumes were added to the library's stocks each year; in the 1850s this figure grew fivefold; in the 1890s eightfold and in the 1900s ten- to twelvefold. By 1913 the total stocks had passed the three million mark and the library was among the foremost in the world. Almost one third of all the books were in the Russian language. The development of book-publishing in Russia (the noted Russian bibliographer Nikolai Rubakin linked the appearance of "a flood of books" with the domestic changes that had taken place) stimulated the influx of books and other publications because of the law requiring a copy to be supplied to the library. In this period too the library kept a keen eye on its receipts of Russian printed matter in order to ensure comprehensiveness. The curators of the Russian Department, Vladimir Lambin and Vladimir Saitov, took up the cause pursued by Krylov, Sopikov, Bystrov, Bychkov and Mezhov, by defending the library's interests in the struggle against negligent publishers, censors and bureaucrats. Through their efforts, by the end of the nineteenth century the Public Library was in possession of the most complete collection of Russian books in the country.

The Public Library could also boast Russia's richest collection of manuscript books and separate autograph manuscripts, documents and deeds. The fact that by the early twentieth century the Manuscript Department possessed autograph manuscripts by the Russian writers Pushkin, Herzen, Goncharov, Griboedov, Lermontov, Dostoyevsky, Turgenev, Nekrasov and Saltykov-Shchedrin and handwritten scores by Glinka, Balakirev, Borodin, Tchaikovsky, Mussorgsky and Rimsky-Korsakov suggested that the library was coping splendidly with its role as custodian of Russia's cultural heritage. 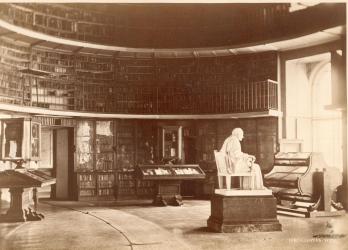 The Round Hall of the Russian Books Stock. A Sculpture of Voltaire

Positive changes were also taking place with regard to the expansion of foreign language stocks. While the humanities continued to represent the lion's share (more than 70% of the allocated funds were spent in that field) the significance of the natural and applied sciences was growing. Limited funds prompted the library to seek other means of acquiring books. Prominent among these, as before, were donations. Between the 1860s and the 1890s the library received some 300,000 volumes from voluntary benefactors, and some 200,000 more in the first decades of the twentieth century. There was probably not a single major figure in the Russian academic world who failed to help. Dmitry Mendeleev, Nikolai Miklukho-Maklai, Sergei Platonov, Alexei Shakhmatov, Vladimir Obruchev, Ignaty Krachkovsky, Nikolai Zinin, Ivan Pavlov and Semion Vengerov all made contributions. They not only donated books, but also willingly acted as consultants in the selection of books from abroad, the creation of catalogues and the description of manuscripts.

The library maintained lively scholarly links with practically all Russian universities, institutes, learned societies, archive commissions and museums, receiving books from the world's centres of learning and major book repositories. The growth of its prestige was also assisted by a tradition which went back to its very beginning: the majority of the staff were "men of learning". This was true not only under Olenin and Korff, but also in the decades that followed.

Among those who worked here were the historian and economist Pavel Sokolovsky whose works on the history of the Russian rural commune are still studied today; Nikolai Chechulin, an eminent authority on eighteenth-century Russia; Ernest Radlov, the historian of philosophy (pupil and friend of Vladimir Solovyev); the natural scientist, philosopher and literary critic Nikolai Strakhov; the entomologist Fiodor Keppen; the Orientalists Avraam Garkavi and Vastly Smirnov; the ethnographer Silvester Batromaitis; the archaeographer, literary historian and ethnographer Leonid Maikov; the expert in early Russian literature Chrysanth Loparev; the literary historian, bibliographer and scholar of historical sources Vladimir Saitov; the outstanding Russian palaeographer Nikolai Likhachev; the Byzantinist Afanasy Papado-poulo-Kerameus; Vladimir Bank, an expert on libraries; and Dmitry Abramovich and Ivan Bychkov, both archaeographers and literary historians. Many of them were elected to the Russian Academy of Sciences and were full or honorary members of learned societies and institutions at home and abroad. In the course of the nineteenth century a number of different scholarly schools formed within the walls of the Public Library through research into its printed and manuscript treasures — Greek and Western European palaeography. Oriental studies and the study of Voltaire. 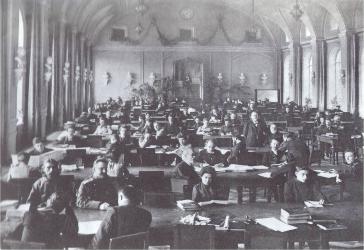 In the reading room of the Imperial Public Library

In the second half of the nineteenth century and the beginning of the twentieth, the library served more palpably than before as a barometer of the public mood. In one of his reports William Hughes (Yuz), who had charge of the reading room, accurately observed that almost all those convicted of political crimes in St Petersburg had been users of the Public Library. Hughes was referring to the early 1880s, but in the following decades, which witnessed a mass upsurge of self-awareness, it still held true. Many members of the last prerevolutionary "intake" of librarians differed from their predecessors in that they overtly displayed their social sympathies and antipathies, allowing themselves to be drawn into religious, philosophical and political disputes and taking part (not always legally) in a variety of political organizations. This applies above all to Alexander Braudo, the head of the Rossica department, who had a wide range of connections in opposition circles; to Dmitry Filosofov, one of the creators of the World of Art magazine and a friend of Zinaida Gippius and Dmitry Merezhkovsky; to Anton Kartashov, head of the Theological department, one of the leading lights of the revival in religious philosophy and a future minister in the 1917 Provisional Government; and to Georgy Fedotov and Alexander Meyer, one-time members of the social-democratic movement, who then in the early twentieth century created a new philosophical doctrine. The events which sent shudders across the whole of Russia such as Bloody Sunday on 9 January 1905, the outbreak of the First World War in 1914 or the collapse of the Empire naturally affected all those connected with the library, users and staff alike.