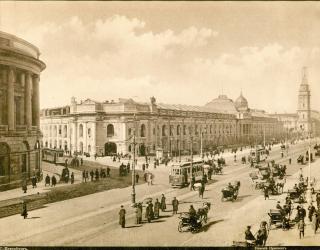 The hundredth anniversary of the opening of the Public Library was marked by a ceremony on 2 (15) January 1914. As in Olenin's time, the official character of the isstivities which almost entirely excluded the wider public — scholars, writers, public figures and ordinary library users — evoked criticism from "the left". Although, as Dmitry Filosofov remarked, "civilian dress outnumbered the uniforms" (of those in state service), officialdom predominated at the event and that was what determined the atmosphere. 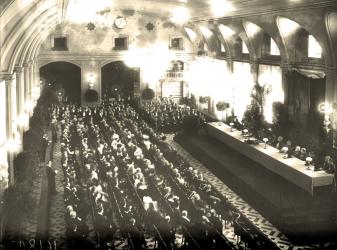 The library was presented with a royal charter granted by Nicholas II. Formal congratulations arrived from all comers of the country: from libraries, book repositories, museums, archives, universities and learned societies, about three hundred in all. Friends from abroad also sent greetings on the occasion. Newspaper and periodicals, including those in the provinces, devoted articles or photographic coverage to the library. "The vigilant monitoring of society", which Bychkov had written about in reference to the 1850s, was still operating in the following decades. In total, between 1795 and 1917, according to figures which are far from complete, some 3,000 publications devoted to the Public Library appeared. To borrow Vladimir Stasov's words: "Here is clear evidence of the position which the library occupies in the cultural movement in our country, and of its composition, and of the personalities who have managed and who now manage its treasures." 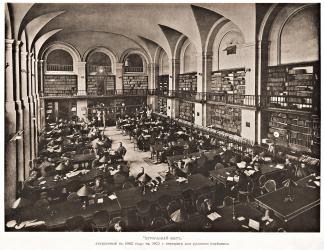 In the reading room of the Public Library

From the outset the library combined the function of collecting and preserving printed and handwritten works with that of providing access to them without payment. The principle that readers should be served free of charge was never breached at any time. The level of education and the state of librarianship in Russia prompted the Public Library to be simultaneously the treasury of the nation's books, an open university and a centre of scholarly research. Russia's "Great Library" had made a considerable contribution to the development of enlightenment and learning. But while there was a marked unanimity in the assessment of its past achievements, the directions which its future development should take became a matter of dispute. These arguments mirrored the positions of the various political forces. When Lenin in exile learned of the forthcoming jubilee from Russian newspapers, he wrote the article "What can be done for popular education" which formulated Social Democratic attitudes and stressed the issue of access to the Public Library. While Lenin expressed outrage at the attempts of the overweeningly protective administration to preserve "our rich public libraries from the mob on the street", an entirely different position was taken by Mikhail Menshikov, a highly influential Russian journalist and leading writer on the Novoe Vremya (New Age) newspaper. In an article entitled "The Great Library", he said much that was positive, and justly so, about the institution in which "the majority of the educated Russian public spent their youth and mature years". But he regarded the democratization of the Public Library and the growth of its role in the self-education of young people as a threat to the country's future: "Seats of education such as schools and libraries should not be abandoned to plundering by the mob," he declared. Menshikov proposed that the library assume the function of directing reading in the character of guardian of the status quo.

The opinions of liberal circles close to the Constitutional Democrats were expressed by Dmitry Filosofov. The articles he wrote about the history of the library are of great value. They are not only brilliant pieces of writing, but also contain neat characterizations of various figures and periods. Filosofov gave his support to further "rational democratization" of the Public Library's activities. "The library," he wrote, "exists for the reader and our wish is that, as it enters the second century of its existence, the library will maintain closer contact with the reader,... so that it turns from a state institution into a truly national one."

Burial of the victims of the revolution

The February Revolution of 1917 changed many accustomed aspects of life in the national book repository which immediately dropped the word Imperial from its title and became the Public Library of Russia. By the middle of the year, new draft statutes which would allow the library's activities to be brought into line with the principles proclaimed by the new authorities had been drawn up and examined in various ministries and in the State Duma. This draft, produced by a team including the academician Vladimir Vernadsky, envisaged the library being run by a director appointed by the decree of the Provisional Government in tandem with the library council. The functions and composition of this council were considerably expanded, such that, although it remained as before a consultative body attached to the director, on a number of issues it now had the deciding say. A truly principle change was that persons of either sex could be taken onto the staff — prior to this women had worked in the library only on a non-staff basis. The suggestions contained in the draft were put into practice quite quickly, although legally the statutes were not adopted by the appointed day, 1 November 1917. The October revolution intervened.

For the first few days after the Bolshevik seizure of power, the library remained closed. A general meeting of the staff voted to join the protest strike being held in Petrograd's institutes of learning and education and refused to acknowledge the new authorities. But this resistance did not last long. As in other organizations a commissar appointed by the new government appeared in the library.