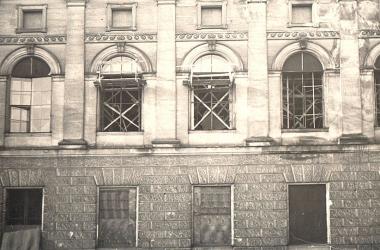 The front of the library during the Siege of Leningrad

The war with Nazi Germany which began on 22 June 1941 and the 900-day siege of Leningrad that followed will remain forever the greatest sorrow in the history of the National Library of Russia. In the first months of the war more than 50 members of the staff joined the fighting forces; 138 died in the terrible winter of 1941-42; the number of workers fell to about 200, a quarter of the peacetime figure. They were left to carry out an immense amount of work under incredibly difficult circumstances. But, for all that, throughout the entire war, including the period of the siege, the library never ceased to serve its readers.

As during the war against Napoleon in 1812, the most valuable parts of the collection — manuscripts, incunabula, other early printed books, Russian books from the sixteenth century and the "Golden Age" (the first quarter of the nineteenth century), the Rossica stocks, Voltaire's library, the Plekhanov House archives and more — were packed for evacuation in an exceptionally short time and taken away to the town of Melekess in Ulyanovsk region. The large group of staff members who accompanied the books managed to preserve these priceless treasures intact in totally unsuitable conditions and in October 1945 these works were returned to Leningrad. 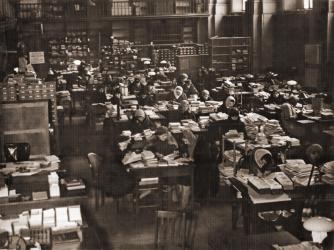 Measures were also taken to protect the valuable stocks left behind in the beleaguered city. The Central Reference Library, print collections, the reading room auxiliary library and also the main catalogues were moved to the lower floors and the cellars. An air-raid defence group formed from the staff lived on the premises and kept constant watch. The library also made a substantial contribution to saving people whose strength had been drained by hunger. In the hardest period about 200 people received treatment in the infirmary set up in the library buildings.

In January 1942 the library lost its water supply — the heating had ceased to function even earlier — and the last of the reading rooms was closed. Up until January 1944 visitors worked in the small rooms belonging to the administration. A few figures demonstrate better than anything that there really was a need for the library to keep functioning. During the siege 9,229 readers made use of its stocks and they were given more than half a million books. In all, throughout the war years, 42,597 people visited the library. In 464,000 visits they were given almost one-and-a-half million different printed items. In 1941-42 more than 10,000 books were provided for use in military units and hospitals. 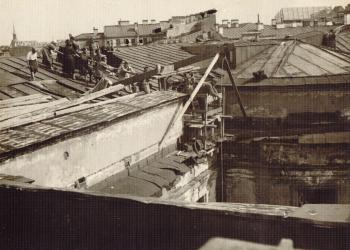 Repair of the roof of the Library 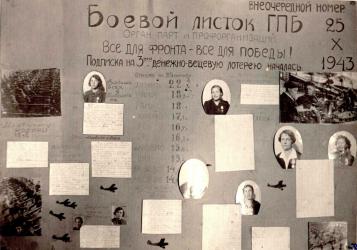 "Everything for the Victory!" Don't forget to buy your raffle tickets to support our troops! 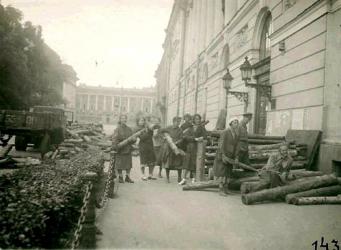 The library also responded instantly to the requests of the military commanders tackling the problems of organizing life in a fighting, besieged, starving city. Various pieces of information and books were provided on a very wide range of subjects: the construction of defences and roads over frozen bodies of water, various methods of camouflage, field surgery, substitutes for foodstuffs and so on.

When electricity and heating were restored following the lifting of the siege, the number of users immediately increased. On 1 November 1944 the large reading hall reopened after restoration work while the branch attached to the Palace of Pioneers and the Library of Local Economy resumed their work. Efforts began to fill the gaps in the library's stocks which had inevitably arisen because publications were missed during the siege.