At the end of January Dmitry Kobeko was removed from the position of library director, and three months later, on 22 April 1918, the People's Commissariat for Education approved another new set of Statutes for the Public Library. 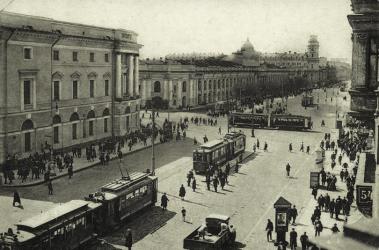 Leningrad. Nevsky Prospeсt. The State Public Library (the building designed by Sokolov in 1795–97) and Gostiny Dvor.

In many respects this document implemented the suggestions of the draft drawn up under the Provisional Government, but on the issue of democratizing the administration of the library it went further still. Collective management became the guiding principle. The post of director became an elected one (the first elected director was Ernest Radlov who had effectively been in charge since 1916). The post of government commissar was retained. The considerably expanded council, with an orientation under the new conditions primarily towards the establishment of links with scholarly, educational and other organizations, proved in general to be ineffective. The statutes did, however, enshrine in legislation the library's status as national book repository with an even greater range of tasks: it was now expected to afford all possible assistance to public education and the development of knowledge among the broad masses of the population.

The years of the First World War, the revolutions and the Civil War which followed left their mark on the library. The number of users dropped sharply, to almost a tenth of the pre-war figure.

The character not only of the readership, but also of the librarians changed. Specialists who had gone into emigration were replaced by many unqualified workers. The supply of new books declined, while acquisitions from abroad virtually ceased altogether. The main sources of new stocks in this period were the collections of former government institutions, palaces, public organizations and private individuals who had left the city. After the revolution the Public Library absorbed the libraries of the State Council, the State Duma, the Ministry of Justice, the Theological Seminary and St Sophia's Cathedral in Novgorod, the Kirillo-Belozersky and Solovetsky Monasteries, the editorial archives of Russkoe slovo and Russkoe bogatstvo, the personal libraries of Professor Boris Nikolsky (lawyer, poet and literary critic), the above-mentioned Dmitry Filosofov, Pavel Miliukov (historian and politician, leader of the Constitutional Democrats), Count Ivan Tolstoi (former Minister of Public Education), Pavel Viazemsky (head of the Chief Administration for the Affairs of the Press) and Ivan Shishkin (artist), the collections of Vladimir Adariukov (art expert, collector of prints), Platon Vaksel (musical critic and composer), Konstantin Voensky (historian, head of the archives at the Ministry of Public Education), Yelizaveta Vodovozova (writer), Alexander Pypin (historian of Russian literature), Nikolai Rimsky-Korsakov (the composer) , Vastly Sergeevich, the collection of the Society of the Lovers of Ancient Literature, and many others.

The problem of making rational use of these riches led to the establishment of a large number of branches which were intended first and foremost to reduce the excessive demand on the reading rooms of the city's main library. 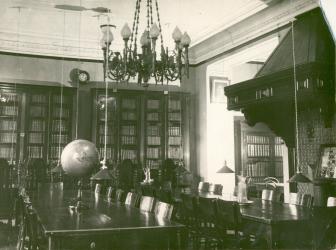 The collection of the Free Economic Society, for example, grew into the Library of National Economy; the World Literature publishing house's stock of books provided the foundation for a foreign publications branch; while in the Taurida Palace, meeting place of the State Duma, the stock of books assembled for that body formed the basis for another library. In 1929 a specialist anti-religious branch began operating with stocks drawn from the Department of Cults (formerly the Theological Department) within the Public Library and from the library of the Theological Academy. Some branches were created from scratch and their stocks were assembled from duplicate copies and acquisitions made by the library itself. All these establishments, however, from the country's first Youth Library (created in the Shuvalov Mansion on the Fontanka Embankment in 1925) upwards, took the form of mass reading halls born of the passing spirit of the time. They accorded poorly with the status of the Public Library and in 1946 were abolished.

One branch destined to endure for a long time was the Plekhanov House created under the auspices of the Public Library in 1928. It was organized and headed by Rosalia Plekhanova-Bograd, the widow of the founder of Russian Marxism, and immediately became the most important centre for scholarly analysis of the theoretical legacy left by that prominent thinker.

By the late 1920s the system giving the library a statutory copy of all publications which had been dismpted by the war was back in full operation and was the main source of new stocks. Purchase as a means of acquiring new works published within the country was of no practical significance whatsoever for a long period due to an almost complete lack of funds. It became financially possible again only in the mid-1930s. Things were even more difficult with regard to the acquisition of foreign literature. The limited amounts of currency available were used chiefly on subscriptions to periodicals, mainly those in the fields of technology and economics. The spirit of industrialization which seized the country at that time resulted in a certain one-sidedness in the library's thinking and this was reflected in acquisition policy. 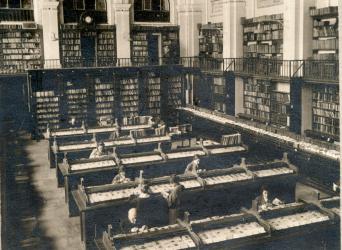 In the 1920s and 1930s considerable changes took place in the structure of the library. The tendency, established as far back as Korff's time, to divide the institution up according to branches of learning into departments, each of which was, as Korff himself observed, "a separate, self-contained library", had proved itself inefficient and was now replaced by a system of functional departments: acquisition, processing and storage of stocks, reader services and bibliography. The new system did not exclude the possibility of organizing departments on the basis of language or type of document (e.g., manuscripts) or separating off what had already long been autonomous parts of the Russian department — maps, sheet music, prints.

From the mid-1920s, with the increasing ideological clampdown in the country, access to certain works started to be restricted on political grounds and what was known as the "forbidden" special stock began to be formed. At first not especially significant, it grew tremendously in the years of mass repressions. In the period 1935-38 alone more than 49,000 items were transferred there from the ordinary stocks. In organizational terms this process led to the creation of a Special Storage Department within the library structure.

At that same time the reading premises were divided into "general" and "research" rooms. The arrangement of specialized halls was established which in general terms still exists today with separate rooms for socio-economic literature, belles-lettres and art; the natural sciences and medicine, physics and mathematics, chemistry and technology. Rooms were set aside for the reading of periodical publications — newspapers and journals — and for work with the cartographic stocks. The same course was followed in the development of the information and bibliographical service. 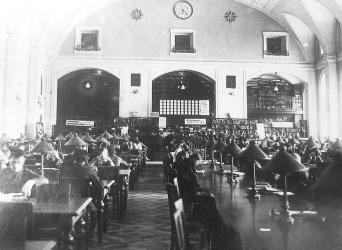 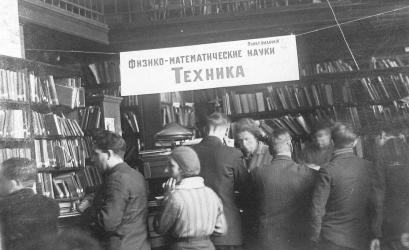 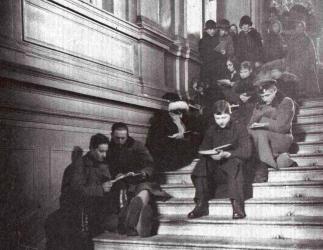 Readers on the stairs of the Public Library

In the 1930s the exchange of books between libraries became a firmly established practice. In the last year before the war the stocks of the main book repository in Leningrad were already being utilised by more than 1,500 other libraries in the country. Gradually such links were also set up with institutions abroad — among others with the New York Public Library and the German Gesellschaft ftir die Forderung der deutschen Wissenschaft (1926) and the Bibliotheque Nationale in Paris (1927). In 1929 proposals came in from no less than 27 libraries around the world, including Bulgaria, Sweden, Norway, Italy, Cuba, Finland and Japan. Particularly close relations were formed with Britain, France and Germany. As a result in the decade 1931-41 exchanges brought some 42,000 printed articles into the Public Library, almost twice the number of books purchased in the same period.

Never, even in the most difficult times, did research work in the Public Library cease, although in the 1920s it was generally of a rather sporadic nature and many interesting studies were then not continued. This period in the library's history is memorable for its association with such major scholars as Dmitry Abramovich, Vladimir Beneshevich, Ivan Bychkov, Nikolai Derzhavin, Vladimir Maikov, Vladimir Saitov, Ernest Radlov and Olga Dobiash-Rozhdestvenskaya. Some of them had entered the library before the revolution. Only the fortunate among them lived to enjoy a peaceful and well-deserved retirement. The library suffered greatly from the mass repressions of the 1930s which directly affected many of its staff. Among the victims were Dmitry Abramovich, Alexander Meyer, Lydia Olavskaya, the director Mechislav Dobranitsky, and, just a little earlier, Vladimir Anderson, the former commissar of the library. Yet the hardest times of all still lay ahead.